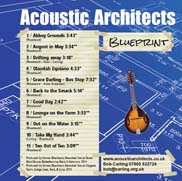 Acoustic Architects are an upbeat folk-rock outfit, playing original songs, their own arrangements of traditional ballads, and a few covers. Expect beautiful harmonies, songs to make you dance, and an ever-evolving line-up of Kent musicians.

Check out our videos:

‘Drifting Away’ written by Dave Woodward and Recorded by Anton French for Public Convenience Records. Shot on the spit in Tankerton, Kent.

’10 out of 10′ written by Dave Woodward and filmed by Anton French. Shot in Canterbury (Dane John Gardens and Westgate Gardens).

We were also caught on film at ‘From Page to Stage’ at the Avenue Theatre, Sittingbourne, on 1 October 2011 – an event to launch the book ‘Strange Fruits’, by Maria C. McCarthy, published by Cultured Llama for WordAid in aid of Macmillan Cancer Support:

Nice review of our gig aboard the SB Edith May on Friday 28 October 2011, by Matt Care of The Cambria Trust:

The Acoustic Architects do “acoustically driven rock music” or folk-rock stuff basically. Two acoustic guitars, a bodhran player (dustbin lid sized Irish goat-skin drum, pronounced ‘bow (rhymes with cow)-Ron’) / main vocalist and the electric bass make up the standard line-up but there are frequent changes by song, with all of them doing lyrics at various times, the bass player grabbing a mandolin for “Fisherman’s Blues” (Water boys), bodhran player wielding a variety of percussion kit, and guitarist Bob Carling switching to mandolin or a mandola named Nelson. This gives all the folk stuff a nice bit of raunch and gives the rocky stuff (up to and including Led Zeppelin!) a nice folky homeliness.

We loved the covers of Crosby Stills and Nash, Simon and Garfunkel and the Water boys and Led Zep, nice sing-along ones like “I’ll be your Baby Tonight” and “Float like Cannon Ball”, folky stuff by Steve Knightley and Phil Beer and the band’s own material – Good Day and Back to the Smack (pub!) being memorable plus “Lounge on the Farm” about a music festival. All the music was intercut by a genuinely funny and enjoyable level of banter between band members and jokes with the audience. They also handed out a variety of “shaker things” so that we could join in with percussion on some of the songs.

A brilliant night had by all and I should thank the Gransdens and Edith May herself for being such good hosts and the band for being so entertaining. I really hope that we, on Cambria, can do something like this.